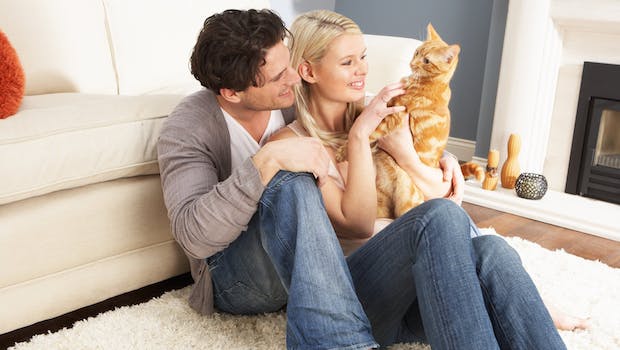 When I first met my boyfriend, Christopher, five years ago, I had only one pair of flat shoes – scuffed boots from college.  Thinking back on my undergraduate experience, I doubt I even wore them 10 times, as high heels carried most of my journeys to and from class unless an inch of ice coated the campus, at which point I relied on a wedge.  Alright, I embellished the latter (somewhat.)  A girly girl in every way, I didn’t know how to make sweatpants pretty or feel comfortable showing my face without a makeup mask, and I never foresaw this changing.  But it did, and I hope it does for other women, as well.

Not that there’s anything wrong with makeup and stilettos – enjoy them!  Just don’t depend on them.  When I look at magazines and the constant barrage of media surrounding us, I don’t have to wonder why so many women are on shaky ground in the confidence department.  I share with you the following lessons I’ve learned from my feline companions and the straight-shooting man in my life:

1. Embrace your individual markings:  On one of my first summer dates with Chris, I panicked about how pale I looked and resorted to self-tanner.  When I say I’m pale, I mean I’m alabaster bordering translucent, so this quick-fix led to nothing but streaks of orange and regret.  When he (knowingly) questioned if I’d put on self-tanner, I came clean (although not in the literal sense, as that involved a week of exfoliation.)  He asked me why I would do that considering I had a beautiful and rare skin tone.  I’d never heard anyone refer to my skin that way, and I felt so silly for trying to change something unique with a product that smelled metallic and left my pajamas and white dresses muddied.

Our partners want us to look like ourselves, and we should want to, as well.  It’s similar to having a dating profile photo that looks nothing like you, photoshopped past the point of recognition.  We’re all unique, and those things that make us different also make us stand out from the crowd.  Find the confidence to show your real markings and not covet others’.

As for cats, the same holds true.  A calico is no more beautifully marked than a tabby – it’s all in the eye of the beholder.

2. Don’t body shame: Two of my cats are tiny, two are of average build, and two are large.  They do not know this.  My biggest cat jumps on the cats half his size and wonders why they aren’t thrilled with the wrestling play date.  If only women could stop the body-bashing we both despise and oddly facilitate.  We come in all kinds of shapes and sizes, and yet I hear so many of my friends go on and on about perceived body flaws.  These perceptions are then coupled with fears about how men view their bodies in comparison to Victoria’s Secret models.  That kind of self-talk leads to generalizations we make about not only our own bodies, but bodies in general.  I cringe when I hear quotes like, “Real women are curvy.”  Beautiful women come in an array of shapes, so let’s embrace whatever figure sees us in our healthiest form.  Men don’t want to hear us tear apart our bodies, and we all-too-often put them in situations where they can’t win, no matter their responses.  Kate Upton, Kate Winslet, and Kate Moss are all different builds, but aren’t they all universally deemed beautiful?

For the longest time, I couldn’t stand that my legs weren’t stick-thin, so imagine my surprise when Chris told me that he loved my legs and recommended that I wear more shorts and skirts.  The right person is going to like your body and not force you to reshape it.  Always remember that.

3. Enjoy food:  Ah, the thrill of treats.  When I shake that bag of enticement, all six of my cats charge forward at my feet.  They love food to the point where it’s an event.  Who can blame them?  Like so many women, I waged war with food as I suffered the above-noted body shame of not feeling perfectly svelte in a bikini.  I weigh five pounds more now than when Chris and I first met, but in exchange for that, I’ve shared lots of pizza with him during Friday night TV binges.  I wouldn’t trade those for any number on the scale.  I’m far more comfortable with my body at 31 than I ever was in my youth.

Eating healthy is a wonderful thing, and I’m a firm believer in taking care of oneself (see below.)  Enjoying life and all its flavors, though, is a pretty great thing, as well.  Don’t focus so much on your calorie intake that you lose track of enjoying the meal – and the conversation that accompanies it.

4. Take care of yourself:  When my cats are tired, they sleep.  (They’re all absolutely exhausted, by the way.)  When another cat upsets them or invades a designated space, they have no reluctance in voicing disdain.  So often, we stress over speaking our minds, or we let someone treat us in a way that we wouldn’t treat someone else.  Cats, and men for that matter, have a tendency to hiss and get it over with, thus moving on with their lives and not holding on to resentment or bitterness.  They usually don’t take things so personally, and they know that it’s better to let your true feelings show than to carry on an act and blow up later.

Honesty is critical in relationships, and the right partner will love you even when you’re less than loveable to the outside world.  If you can’t voice what you really want, then how will your partner give it to you?

This is such a hard one, especially for those of us who strive toward agreeableness.  If it’s any help, try to think of wording things in a way that you would not take offense at if they were said to you.  That way, you’re saying what you think without having to lose sleep over the issue.  The more you do this, the more naturally it will come to you.  In my home, hissing and purring are both common noises, and they both indicate a type of respect: for others and ourselves.

5. Exist in the moment: I’m always amazed at how my cats watch birds with a focus similar to how Chris plays video games.  The old adage of stopping to smell the roses is famous for a reason – which brings me back to high heels.

My old shoe collection had some gorgeous colors and strappy embellishments, and I still have quite a few pairs waiting in my closet for the right outfit, or at least for this polar vortex to lose its grip.  When Chris and I went on our first trip together to Las Vegas, I packed about five pairs, imagining endless sequins and feathers (apparently, in my head, Vegas meant dressing like a showgirl.)  How many of those pairs did I end up wearing?  Zero.  Instead, my Target sandals beat the concrete strip that week, and I remember feeling so thankful I had them.  Countless girls struggled around us in platform shoes, crippled by peep-toe torture.  I sincerely wanted to offer them a bench and some band-aids, knowing that my early twenties self would have struggled alongside them.

My cats would never miss out on squirrel-watching just so they could smooth their fur back in place, and I never could have kept up with Chris had I worn sandals with a 4 inch lift.  Oftentimes, the best vacations rely on sensible footwear and spending hours doing practically nothing.

Life is all about growing, and relationships can help us better understand ourselves as we stumble and succeed.  Likewise, relationships can benefit from self-confidence, responsible honesty, and indulging in some treats now and then.  Hopefully, we find a good balance of hisses and (mostly) purrs along the way.