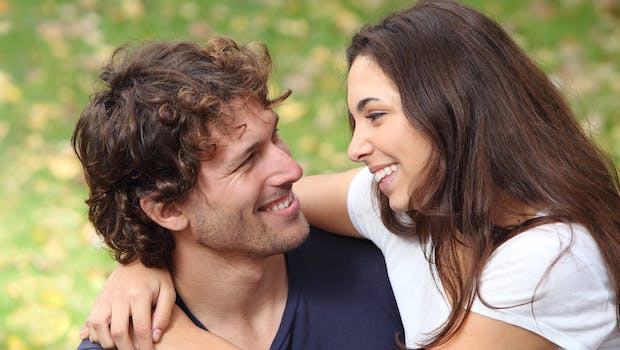 Is He Flirting With You? Look Out For These Signs!

Do you have a guy you are interested in but are not sure of his feelings? Ever found yourself wondering what it means when he does certain things or acts in a certain way? Ever wondered which of these signs you need to look out for to know if he is really flirting with you?

If you answered in affirmative to all these questions, then probably you need a few tips to help you sail through and find out if he is really into you.

If a guy you are talking to maintains eye contact for an extended periods of time, then that could be a sign that he is attracted to you as well. However, shy guys can also hold eye contact, albeit for short periods of time.

Was that a blush?

Don’t dismiss the shy guy as unapproachable. If he blushes whenever you are around, then there is your cue to start off a conversation and help the guy out as he could be dying to talk to you. Even for guys who are not shy, blushing is definitely a good sign for that subtle hint of his interest in you.

Are his nerves taking over?

Ever wondered why that guy always seems restless when around you? Well, it may not always be because he wants to leave. Those are just his nerves taking over as he tries to sum up the courage to talk to you.

Are his eyebrows raised?

Although a guy that in interested in you might try to conceal his eyes when talking to you, if he raises his eyebrows with widened eyes, then that is a sign that he is flirting with you.

Is he being a copycat?

This is a very interesting fact. If he is flirting with you, he will unconsciously copy what you are doing. Have you noticed that whenever you move your hand through your hair, his hand moves to his hair too? Or even when you shift your leg, he does too? It is the magic of flirting and these are some of the signs you need to look out for.

Does he tilt his head?

Have you ever noticed that guy tilting his head towards you as you talk to him? It means he really likes you and is being attentive, so as not to miss out on anything you are saying.

Is there a smile playing on his lips?

A guy that is interested in you will smile at you as a sign that he wants to talk to you. Therefore, take it as an invite to start a conversation.

Does he stand akimbo?

A guy who is attracted to you will try to show you they are self-assured by standing with hands placed on the hips, or even thumbs placed in the loops of his belt. This sign may not be that obvious, but it can act as a guide.

Are his pupils enlarged?

Did you know that if you like someone, your pupils enlarge and if you don’t, they contract? With this in mind, all you need to do is look at his eyes as you have a conversation. If they enlarge, then you know he is interested.

Did he just touch you?

Has the guy ever given you a soft touch, even as he passes by? Then he is definitely interested in you and wants to capture your attention. However, watch out for those creeps who are, well, just creeps who want to play around in a relationship. You know what I mean, don’t you?

Since you now understand the signs to look out for to instantly know if he is flirting with you, it is time to take the bull by the horns. Don’t let the opportunity pass you by!