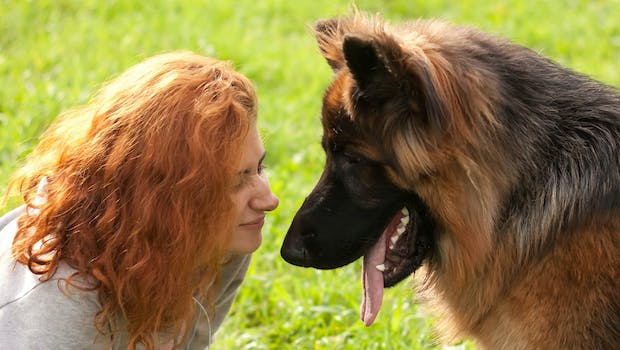 For nearly five years Anna Lamb, 36, has struggled with depression. She has sought help from doctors, taken various prescription and over the counter medications, vitamins, and an array of natural remedies all in an effort to control it. What has perhaps been the most welcome and effective antidote to combating her depression, however, came to her by chance in the form of a neglected, seven year old border collie named Mike. A friend of hers who is active in a border collie rescue group convinced Anna to bring Mike home and care for him. “It was hard to live alone,” she explains, “hard to come home at times. The only thing facing me was cleaning, the television, the computer, the telephone; no other living being. Mike has changed that. Itís nice to come home and have him waiting for me. One of my classmates even told me a
short time after I got Mike that my disposition changed. I seemed happier.”

Researchers are working to determine whether or not there is any valid medical evidence to support what pet owners like Anna have professed all along, that pets make a positive difference in their lives. In recent years studies have been done with groups of people such as those who live alone, the elderly, and even married couples to see what health benefits, if any, are gained from owning a pet. These studies have included looking at the physical as well as emotional aspects of pet ownership.

Karen Allen, Research Scientist from the Department of Medicine, State University of New York at Buffalo, specializes in research on the physiological effects pets have on humans. One of her studies involved 48 stockbrokers, all of whom were being treated with ACE inhibitors, medication for high blood pressure. They all lived alone and had not owned pets for at least five years prior to the study. Allen chose people who had the means and desire to care for a pet. ‘I wanted to make sure these were very responsible people,’ she says. She also made sure each of them would welcome a pet into their lives if they were selected to be part of a group that was assigned pets. When the study began, half of the participants were selected at random and asked to acquire their choice of a dog or a cat. At the end of six months, when they were all receiving ACE inhibitors, those people in the pet-owning group remained significantly more stable during stressful times than those without the pets. They showed less of an increase of blood pressure and heart rates than the non pet-owner group. After the study was completed, and the participants were told of the results, Allen says, ‘They kept the animals, and in fact, at least half of the people [in the study] who got the drugs went out and got pets.’

“One interesting finding that we seem to have discovered,” Allen points out, “is that people who have the fewest social contacts seem to benefit the most. We think it’s because pets substitute for a certain type of social support.” An earlier research project she did involved elderly women, who lived alone, with a pet. She found that they tend to be more active and have lower blood pressure than other elderly women living alone with no pets. Because pets demand attention and exercise, quite often this makes their owners more active than their counterparts who do not have pets. Additionally, this increased activity translates into health benefits such as less depression and anxiety, and increased social behavior, which alone has been proven to be beneficial to our health.

So, should you rush out to the shelter and adopt Fido to improve your health? That all depends. According to Allen, people who benefit the most from having pets are those who view the animal as a cherished member of the family. You might think of Anna though, who has found a best friend and pseudo therapist in her dog, Mike. “He is very affectionate,” Anna says. “Mikie looks at me with his big brown eyes and forces me to get up when I’m depressed. It’s hard when he’s asking me to save his life and let him outside but he also seems to care about how I feel. Now I have someone to nurture.” But the truth is, Anna and Mike both have someone to nurture.